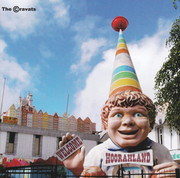 THE CRAVATS
‘Hoorahland’
Label: Overground Records
12-track LP OVER 172LP Barcode: 0720355546076
12-track CD OVER 172CD Barcode: 5060114368118
Release Date: 13th March 2020
'You feel that when the music stops you're always left without a chair' - Hoorahland
We all inhabit Hoorahland.
It's the great bemusement park in your head and what Walt would have wanted. We never leave. Trapped by its turnstiles, looping the loop of uncertainty for eternity or, at least, until the Chessington World of Dementia kicks in and brings blissful release.
Oh, and Jello Biafra duets with The Shend on Now The Magic Has Gone, a song about two ageing theatre queens whose everlasting love has tragically fragmented into a thousand shards of bitter hate. It's a tango.
You what?
After 43 years, Hoorahland is The Cravats totally in control of where they want to be sonically. A polished progression from 2017's critically aclaimed Dustbin of Sound album.
Twelve Carollian compositions chronicling the view from Shend's brain laid like a sumptious set of doilies upon the sax-riddled, bass-laden engine that Biscuits, 91, Garstang and Naan have whittled.
It's an intricate Dada Vinci design for the dysfunctional dodgems in which we nervously perch as they bounce off the buffers and each other while we fumble frantically for the imaginary steering wheel.
Without employing too many cliched Theme Park music metaphors such as 'white knuckle roller coaster ride' and 'spinning teacups of terror' what do we get?
Apart from last year's single Shy and Good For You which were championed on the wireless by Gideon Coe, Marc Riley and Henry Rollins amongst others, there are ten other opuses covering everything from the lack of god, Austin Allegros and granny's faded jeans to tight fitting jar lids, grouted portholes in Cartel submersibles and Bryan May's shirt.
Plus, of course, that duet with Jello.
As I said we all inhabit Hoorahland but it's not about the rides, it's more about the view from the queue.
And no, it's not a ruddy concept album . . . although the definition of 'concept' is 'an abstract idea' and as The Cravats have been as abstract as fuck for 43 years then maybe it is.
Whenever I start to feel important, I think 'well, I never did much for The Cravats and I didn't stop Toyah.' - JOHN PEEL

Great to hear a saxophonist playing riffs . . . This group are vicious in their intent, yet relaxed taste abounds. - MARK E. SMITH

One of the greatest bands in the history of music. - HENRY ROLLINS