The latest news this week about more great icons of rock/pop/entertainment leaving us reinforces what Danny Baker said on 5 Live last Saturday - don't let anyone con you otherwise 2016 has been an awful year no matter what has happened in your private life.

I am sure everyone has there own lowlights as their personal heroes have died but for me as a (rare on this forum?) lefty-liberal having to cope with Brexit, Trump and the scary rise of the far right while dealing with the death of heroes like Ali and Bowie and once again seeing my England football dreams disintegrate (Iceland!!)) and more frustrating misery at Nottingham Forest this year has truly sucked.

And the Stranglers? A great tour in March but any year when Jet almost officially retires (without due recognition of the fact) and we are as far away from a new studio album as Pigeon is from a dictionary cannot be a good year can it? After all It has now been nearly five years since Giants (an album which diminishes rather than grows over time IMHO) and to put that in context in the five years from 1977 they released six almighty elpees and 16 singles. Nope, not a good year unless you prefer the pre-gig drinks to the gigs as many seem to do now.

As George Michael said 'you've gotta have faith" and I just have to have faith that 2017 will be better all round. I mean with Trump as President what can possibility go wrong???

See you on the other side folks.... 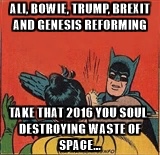 saminblack I don't follow football but I agree with what you've said there I hope that next year the stranglers restore a degree of credibility in as much as it will not be the usual tour in the uk and overseas age should not be a barrier to creativity the stranglers should now produce something for all of us in 2017 a new album would be a good start and I hope also that jet will release a new book as the historian and archivist of the band it would be something we would all relish I'm sure I still believe that the stranglers have it in them to create a good album and I think its only what we deserve as loyal fans ....... its been a sad year losing bowie and so many others people who were famous and people that we know in our own personal lives and we will remember them appropriately and with dignity I'm sure of that......... speaking of dignity Donald trump is absolutely fuckin mental he has no dignity at all he is the school bully the rich kid that buys his way out of trouble a draft dodger a sexual assaulter a con artist and although really stupid in term of political nous hes a cunning bastard I watch fox news cos its full of lying shite and the best platform to hear and see trumps lies the yanks who voted for him you get what you deserve 2017 may be a very bad year in America and it serves you right for being stupid and not seeing through orange hitler
Top

SPOILER ALERT: If you thought 2016 was a bad year for the deaths of celebrities, childhood icons and famous people we grew up with in our 'lives' - then you are gonna hate 2017, 2018 and beyond - because believe it or not - 2016 was only the tip of the iceberg. Also, wrapping them up in cotton-wool won't do any good - at their age they will either expire due to overheating or their breathing will give out due to inhalation of cotton fibres blocking up the lungs.

P.S. Don't get me started on politics

Allow me to re-arrange your face, sometimes I'd really like to get to know you better
Top

Agreed, given the average age of many culture icons of our lives it will get worse.
Apart from the inevitable it was as good or bad a years as ever.
--eric--
i was attracted by a night torchlight parade
and there i came
Top

Think yourself lucky it wasnt you
do you wanna
Top

Likewise. Things never get better, do they?
Top

Bowie was the pinnacle of it all

That hit me, but at the end of the day it was an absolutely cracking year for me. My dream to get a bunch of my mates into the wheelchair rugby division against ex and current Team GB players became true, and we did so well (So far)