Thinking of having a "Pre-74" page here. Key events that formed the band's musical style etc. Such as Hugh seeing Frank Zappa gig in Copenhagen in 72. Rusty Butler key dates (if we have any?).

Any ideas or concrete dates most welcome. Let's have this as a discussion then I'll create a formal page with them on.

There have been some early gig adverts for Rusty Butler and Johnny Sox on the memorabilia FB site in the last couple of weeks.
http://www.firenza.net - my homage to a seventies Vauxhall
Top

Don't forget that early jazz single Jet was on, I can't remember the name offhand but it was on an early Ratter.
"I woke up on a good day, and the world was wonderful"
Top 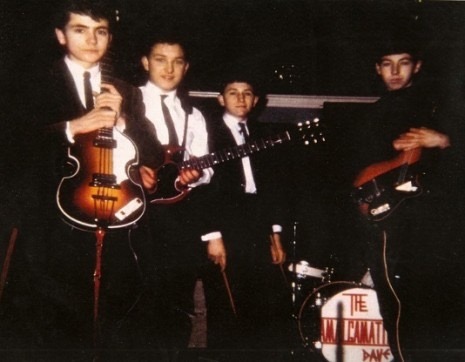 ...I'm making lists of all the people I love,
and all the cunts that should fuck off...
Top

"In 1964 Hugh Cornwell joined his school band. It wasn’t just any band. It was the band formed by Richard Thompson who would go on to form Fairport Convention. The then 15-year-old, Hugh Cornwell posed with his Beatles style Hofner violin bass for the photo with the band called Emil and The Detectives.

’I remember getting the violin bass guitar I’m holding here, I was about 15 and had saved up £50 for it. Before then I’d been playing a homemade version with a neck the thickness of a plank of wood. Richard Thompson (on the far right) suggested I learn to play bass because he was forming Emil and the Detectives (the band in the picture) and he needed a bass player, so he taught me. We were good friends from school and we played each other music that we had discovered, like the Rolling Stones and the Who. Richard’s older sister, Perri, who was the social secretary at the Hornsey College of Art in north London, would book us to play parties and pay us £30 per gig. Our biggest claim to fame was supporting Helen Sahpiro at the Ionic cinema in Golders Green. But after we took our O-level [exams] we lost touch. The next I heard he was the lead guitarist in Fairport Convention and I didn’t see him again until we both played a festival in Madrid in 2008’

Obviously played Thompson's 70th birthday bash since then too.

evonx
Man Of The Earth

https://ninebattles.com/tag/rusty-butler/
--eric--
i was attracted by a night torchlight parade
and there i came
Top

Dave would have been 24, he'd been gigging before that in other bands around Brighton

what were the others doing at that time?
Top

JJ has mentioned a few of the 60s blues gigs he attended, the challenge is tying the year down
Then I got tired of counting all of these blessings, and then I just got tired.
Top

Yeah he mentioned the pub name recently as well in an interview? Maybe googling the pub name and "Peter Green" 60s might bring something up?

theraven1979 wrote: ↑16 Sep 2021, 09:40 Yeah he mentioned the pub name recently as well in an interview? Maybe googling the pub name and "Peter Green" 60s might bring something up?

Can’t see a record of Black Cat Bones (another act JJ mentioned) playing Guildford, but they were playing around the same time.
Last edited by Bear Cage on 16 Sep 2021, 10:28, edited 1 time in total.
Then I got tired of counting all of these blessings, and then I just got tired.
Top