Going to see the MIB abroad.... - Did anyone else do thsoe SIS trips?

Any `classic` topics will be moved here.
Post Reply
124 posts

Thanks Mr S-I'll get my thinking cap on...

Probably won't be as detailed as your ones...

Did someone say "Wonky"?
Top

1997 saw an SIS organised coach trip to Alkmaar in the north of Holland. We met up the day before the gig at lovely King's Cross station in the morning. Everyone had turned up, apart from a well known Scot, who had missed his flight down...We had one full coach load & the journey to Amsterdam passed pretty fast, espcially a one guy had bought his acoustic guitar & proceeded to play his version of many Stranglers songs. We arrived in Amsterdam late afternoon & checked into a plush hotel (not my choice!).
As the coach wasn't leaving until the following afternoon, everyone had some leisure time in the Dutch capital. Everyone split into small groups & went their seperate ways for the evening. We opted for a curry in a restaurant we've been in many times before but most people had other ideas & headed for bars or the Red Light district(or both). People came back with tales of strip clubs, tarts in the hotel bar & even more sordid details...
We all met up early the following afternoon for the trip up to Alkmaar, a quiet town which seemed pretty deserted. Time for beers & a spot of dinner (most people opted for the nearby McDonalds as there was little else).
The gig was in the Atlantis which was a small club (probably 600-800 capacity) with a very low roof. Marcel & the guys from Dutch SIS were there but the majority of the audience seemed surprised to see the arrival of a coach load of British fans. The UK presence definitely livened up the evening especially as we proceeded to take up the first 2 rows in front of the stage. The band seemed fired up by this & the gig was great. Mr Roberts took some pics of the British for me & even had time to accept Mr Spooner's credit card for services rendered! He seemed to enjoystage diving onto the British fans every chance he got...
After the gig, we planned to set of home straight away but this was delayed slightly as quite a few people had blagged backstage to see the band, who were in good spirits. It was obvious that they appreciated the British travelling across to see them (as they still do).The return home was uneventful, especially as most people (apart from the guy with the guitar!!!) chose to get some sleep. We arrived back in London the next morning & everyone went their seperate ways.
One really nice thing about this trip was that quite a few lasting friendships were made. Most of the people who came along were/are well known faces like Charlie, Pete, Reg, Mr Spooner, Scott to name but a few.
Roll on the '08 trip....
Did someone say "Wonky"?
Top

Brought back a few memories. Forgot all about the sing song at the back of the coach with the guy who had an acoustic guitar. What the fuck is his name? Actually met him again 3 years ago at the Birmingham punk all-dayer.

Also remember the likes of Charlie, Andy, Dagenham Ray, Brian Southgate etc on that trip. Still see them all occassionally which is good. What happened to the guy who did the merchandising? (Carl?) - he was sat next to us on the coach.

Had the munchies big time and found a great delicatessen which was open late. Ended up stuffing myself with cream cakes and pizza in the early hours. Yum! Yum!

On Sunday there was a group of about 8 of us who started on the ale very early. Did a bit of a pub crawl before we ended up in an Argentinian restaurant for some grub. On the way we almost walked into a mass of Ajax footie fans who seemed to be waiting for their Feyenoord counterparts who were also arriving in town that day. We did a quick about turn when we saw them all I can tell ya!

And the gig? I really enjoyed it. I can remember 'Smalltown Heroes' were the support act. I actually watched them on this occassion, not many others did if memory serves me well. Who would have thought we were watching a future Stranglers lead singer, eh?

Also remember quite a few of us heading upstairs to find the band after the gig. One of their crew looked a bit like Jeremy Clarkson much to everyone's amusement. Think Paul Roberts appeared from somewhere to meet us. Don't remember any of the other band members but who could blame them for keeping out of way due to the state most of us were in by then!

Good reading chaps excellent stuff. The forums need more posts like this. Not seen much of Brian Southgate these days - Trust he's still going to gigs? Last time I saw him was Rats Rally I think. You could always find him down the front.

theraven1979 wrote: Not seen much of Brian Southgate these days - Trust he's still going to gigs? Last time I saw him was Rats Rally I think. You could always find him down the front.

Last time I saw him was SBE in 2002. Also saw pictures of him and his trike at one of the 'Guildfests' somewhere on the net. Might be in the gallery actually. So, I presume he still goes to the gigs.
Top

ThruBeingCool wrote: One of their crew looked a bit like Jeremy Clarkson much to everyone's amusement.

He was called Ian Faddy & was the tour manager. He only lasted about a year & then moved on. Oh, & you're right, he did look a lot like JC but didn't like to be reminded of it...
He was replaced shortly after with another guy who was unkempt, balding & portly who looked a bit of a danger to children. We nicknamed him the Tour-Paedo

Did someone say "Wonky"?
Top

''I THINK THE STRANGLERS ARE CRIMINALLY VULGAR, VIOLENT AND VORACIOUS, AND I OFTEN WONDER HOW THEY GET AWAY WITH IT.''
Top 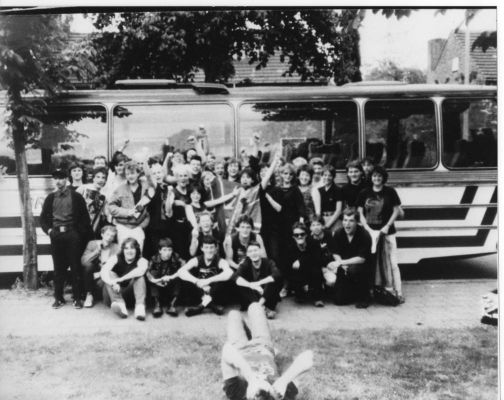 Before the wonky bus.......this is the May 1985 coach trip to see The Stranglers at Pink Pop Festival in Geleen, Holland. Travelling fans gathered beside the bus for this picture after the concert. The other acts that day included Chris Rea, King, Steel Pulse and China Crisis. John Peel was the compare.
This pictured appeared in Strangled a few months later. I'm the one in the shades kneeling, my mates Phil (end of the row on the right) and Rob (centre next to flag).Anyone else spot themselves?
Last edited by scott on 07 Aug 2009, 09:55, edited 1 time in total.
Top

Before the wonky bus.......this is the May 1985 coach trip to see The Stranglers at Pink Pop Festival in Geleen, Holland. Travelling fans gathered beside the picture for this picture after the concert. The other acts that day included Chris Rea, King, Steel Pulse and China Crisis. John Peel was the compare.
This pictured appeared in Strangled a few months later. I'm the one in the shades kneeling, my mates Phil (end of the row on the right) and Rob (centre next to flag).Anyone else spot themselves?

I'm wearing a denim jacket and holding a copy of the programme....standing behind the guy on the left of the front row who are sitting on their arses!!! Simon is to my right looking over my shoulder. There were two brothers on that trip called Tim and Simon are they on here?? We got wasted on Stella with them on the boat..very funny guys!!!

Last edited by Cells&Plasma on 07 Aug 2009, 10:05, edited 1 time in total.
Sir Martin Rushent: “In my experience, the longer you spend making a piece of music, the more likely it is to be a pile of shit.”

speaking of the s.i.s,does anybody know what exactly happend to it.i seem to remember talk of financial problems.
dont get your trossachs caught in your sporran
Top

manticore wrote:speaking of the s.i.s,does anybody know what exactly happend to it.i seem to remember talk of financial problems.

According to the No Mercy biog, SIS folded in 1997 due to financial problems, basically there was no longer any money coming in from major record labels, SIS started to manufacture their own CD's and videos to pay their debts, but this resulted in running up more debts with their suppliers. I hope this partially at least answers your question.

PS only skim read some of your coach trip experiences, I'm kind of jealous I wasn't a bit older in the 80's , my mum had to be persuaded even take me to the stranglers in 87, there was no way as a school kid she would have had me go off to Europe to see the band. They sounded like better times to be spending one's young adulthood than the soul-less bland 1990's were that's for sure. No wonder a lot of kids these days try to mimic a lot of fashion styles and music tastes of the 80's; e.g. am always seeing 'kids' in Camden Town with t shirts of say the sisters of mercy and its patently obvious they weren't even born when they were making good records as just one example or the amount who sport the 'UK 82' punk look for example .
Top
Post Reply
124 posts